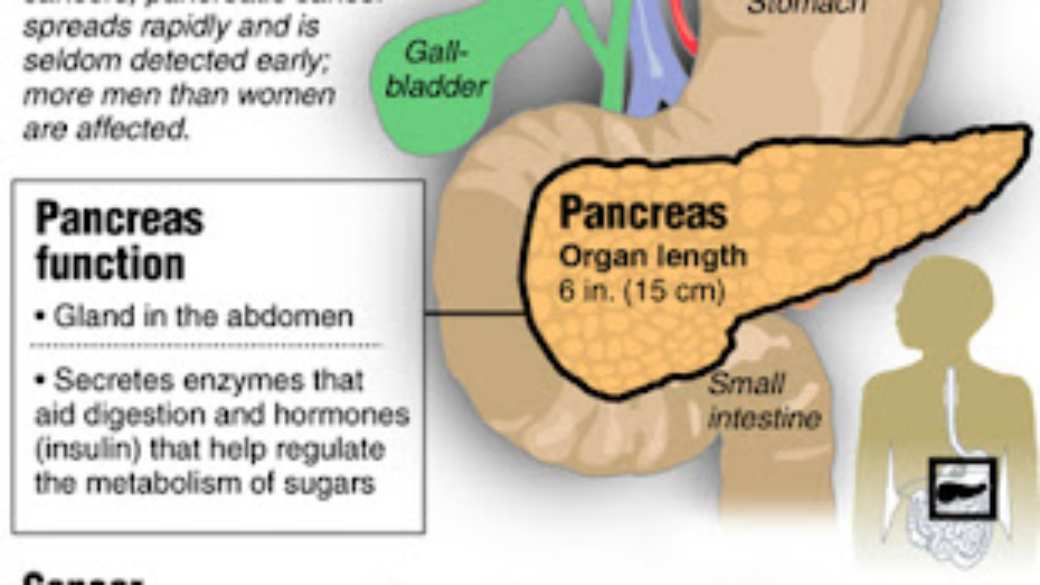 Pancreatic cancer is a fatal disease in which the healthy cells in the pancreas stop to work correctly and start growing out of control (Casari & Falasca, 2015). These cancerous cells have a potential to build up and end up forming a mass of cancerous cells which is referred to as a tumor. A tumor caused by cancer is usually malignant meaning that it can rapidly grow and start spreading to other body parts. As the pancreatic tumor grows, it affects the functions of the pancreas and begins by spreading and growing in the nearest blood vessels and closest organs. Eventually, if the tumor is not diagnosed early enough, it spreads to other parts of the body through a process known as metastasis. Pancreatic cancer has a tendency of spreading silently before diagnosis. It often goes unnoticed until when it reaches advanced levels when it is difficult to treat. Despite the fact that making a diagnosis of this disease at an early stage has proved somewhat very hard, it is also difficult to treat because it is highly resistant to chemotherapy and radiotherapy (Han et al…, 2013). . As a matter of fact, in most cases, the symptoms of pancreatic cancer only develop after the disease has already grown in the body and has started spreading to other parts. As such, this makes it one of the fatal cancer diagnoses as compared to other types of cancers. This disease is such deadly that it is ranked fourth in the main causes of deaths related to cancer in the United States. It has the record of becoming one of the fatal cancers in U.S. The main causative agents for pancreatic cancer are said to be genetic factors, followed by other causes that damage the DNA such as smoking, getting elderly, and diabetes. However, dietary elements such as obesity, highly consuming red meats, and fried food are also potential risk factors that could play a critical role in the development of cancer of the pancreas. Several research studies have evidenced that consuming diets which are rich in fresh fruits, vegetables, nuts and whole grain would be very significant in preventing pancreatic cancer.

How Diet can reduce or prevent pancreatic cancer risk

Diet has a profound influence on the development of pancreatic cancer. Numerous studies have been carried out to identify the relationship between diet and the possibility of contracting pancreatic cancer (Stan, Sing & Brand, 2010). Most of the studies have agreed to the fact that a diet which is high in fat and smoked or other processed meat is associated with the development of this disease. As such, one should consume a healthy diet, one that is rich in fresh fruits, vegetables, and whole grain. This will prevent one from getting a high risk of contracting pancreatic cancer. While no diet has been proven to change the risk for pancreatic cancer, a diet like the one detailed above, one that is particularly rich in vegetables and fresh fruits, with controlled lean meat are the most advised diet for the overall health of the body. Therefore, consuming a diet that is characterized by fresh fruits and vegetable, nuts as well as whole grain foods, combined with controlled calorie levels, is a valuable mechanism for prevention of pancreatic cancer.

Vitamin E is not only crucial for the prevention of pancreatic cancer, but it is also vital in keeping healthy as well as preventing other diseases. It is found in a broad variety of foods, and it is best consumed in a healthy diet (Stan, Sing & Brand, 2010). The most common and reliable dietary sources of vitamin E include nuts such as hazelnuts and peanuts and vegetable oils such as sunflower and corn oils. In addition, green leafy vegetables such as kales, broccoli, and spinach also contain vitamin E. There are plenty of benefits that go along consuming plenty of vitamins E. Its primary function is to protect the cells from damage, and it goes ahead to help in the reduction of a variety of health-related problems such as cancer and particular pancreatic cancer as to per this discussion. In addition to protecting cells, vitamin E has many other roles (Han et al…, 2013). For instance, it plays a key role in the functioning of the immune system, and it also catalyzes the production of prostaglandins which are hormone-like substances that are responsible for regulation of several body processes such as contraction of muscles and blood pressure. Vitamin E also aids in the repair of muscles, and thus it is associated with a decreased risk of developing age-related cataracts.

Pancreatic cancer in the past was considered on relatively rare occasions. However, in the recent past, its incidence and development in quite a considerable part of the population have been increasing gradually. As discussed before, cancer of the pancreas is now the 4th leading cause of cancer-related deaths with, and it’s estimated that will soon rise to the 2nd position. Therefore, it is the high time that people change their diet if at all they do not want to be attacked by this fatal disease. They should begin taking a high-quality diet to reduce the chances of developing cancer of the pancreas. This diet should contain fresh fruits, vegetables, slender meat, whole grains, and legumes while it should be low in sodium and sugar. Vitamin E is also worthwhile for everyone, in addition to the fact that it plays a significant role in preventing chronic and/or life-threatening diseases such as cancer of the pancreas. Moreover, vitamin E is used as a chemo-prevention agent since it prevents neuropathy that is caused by chemotherapy in cancer patients.